This house was built in about 1904, at a cost of around £75. The Spencer family from Hackney moved in as soon as it was finished. Arthur Spencer the second youngest of the six children, was born in the house in 1905, and wrote a memoir seventy five years later leaving many details about his home.

Arthur describes his home as having two large bedrooms upstairs, a front room, known as the parlour, kitchen and scullery, with an outside lavatory and a garden. The rent was four shillings and sixpence a week, with the first two weeks free because work was still going on in the gardens. All the walls were freshly painted ready for the new residents.

What Arthur does not describe is how eight people managed to live in this small space.

Until the new houses were built in 1904, a stream with watercress beds had run along what was to be the line of their back gardens. The area was only just ceasing to be rural. 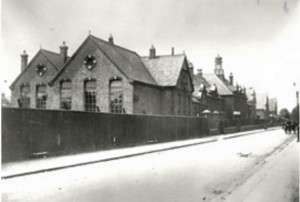 Like most local houses, 104 Longfellow Road was terraced and made of brick with a slate roof. There was a small front garden with a path leading up to the front door and a larger, long back garden.

By the beginning of the twentieth century many new houses were being built with bathrooms – but Longfellow Road, like many in the Queen’s Road area, was built as cheaply as possible for the “buy to let” market of its day.