Worked as: A lodging house keeper

Harriet Hooker is remembered today chiefly because of her ornate tomb in Queen’s Road Cemetery. Hers is the only mausoleum – a marble house to contain her coffin, on its own among the thousands of more modest grave stones.

The inscription gives only her name and date of death, and anyone seeing it might well think that a grand rich lady is remembered here. The truth is somewhat odder.

Harriet was born near Hastings in Sussex in 1842, and by 1871 was living with her widowed mother Eliza, her husband William and her baby son, another William, in a large house in London Road, Hastings. This was run as a lodging house, and the other residents included a widowed Italian Countess and her daughters and lady’s maid, and a retired sea captain and his family and servants. William Hooker gave his occupation as carpenter and joiner – he may have had a job in Hastings. 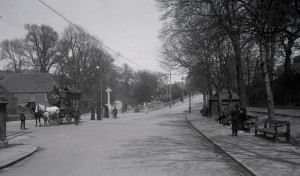 The next trace of Harriet is not until 1901, when she was living in Walthamstow with her by now adult son and his wife Julia. The younger William was working as a Land Surveyor, and Harriet is listed In the census return is living on her own means. It was not until two years later that William and Julia’s son was born – sadly the little boy was to die aged only seven; his grave is in Queen’s Road Cemetery, near his grandmother’s tomb.

By 1911 Harriet was living as in Winchester Road, Higham’s Park as the lodger of Francis Hill, who lived in a five-roomed house with his wife, daughter and mother in law as well. She could certainly have afforded a home of her own, but may have chosen to live modestly to save money – or she may have liked the company. By this time William and Julia Hooker had moved to Coventry, and had two small daughters, Ethel and Florence.

Harriet is listed in the 1911 census as being deaf – we do not know whether she was born deaf or had become so. She was also still married – her status is wife and not widow. It appears that neither her husband nor her son were a part of her life by this time. The story goes that the older William was “no good” and drank too much, so when Eliza died, Harriet sold up, took her son and left both Hastings and her husband for good. We are told, too, that Harriet had fallen out with William and Julia over their son’s death, and the quarrel was never made up.

Harriet bought the plot for her mausoleum and made her will many years before she died. She left detailed instructions for a little house of solid white marble, with Ionic columns, gates, gold leaf decoration, the whole to have railings all round. Any money left over was to go to Walthamstow Hospital.

After Harriet died in her lodgings, aged 72, in 1913, it took more than a year before her tomb was ready. The work was carried out, exactly as she had wanted, and meanwhile her body waited in its lead coffin in a local mortuary. It is possible that either her husband or her son tried to contest the will, but in the end Harriet’s wishes prevailed

When her funeral finally took place, it was attended only by her solicitor, executors and a representative of the hospital: there was some money left to give to them. The local paper printed a report about the tomb and the ceremony – it is carefully worded and leaves out all personal details.

Harriet’s tomb is still in place – the gold leaf is long gone, and the white marble has weathered so it has become less eye-catching, but it is by far the grandest and most notable memorial in the cemetery.