Today, Markhouse Road is a traffic-saturated route from the Lea Bridge Road to St James Street and beyond.

The Mark House stood on the site of what is now Markmanor Avenue, just to the west of St Saviour’s Church – there was a house there from at least the thirteenth century; it changed hands many times, belonging at one time to the nuns of St. Helen’s, Bishopsgate.

The name comes from the word “maerc”, which means boundary – part of the manor was in the parish of Leyton, part in Walthamstow, and the house stood beside one of the boundary stones.

Until the 1850s there were only a few farm labourers’ cottages along the southern part of Markhouse Lane. But with the coming of Lea Bridge Station the area began to be developed – Union and Prospect Roads were built on land that had been part of the common. 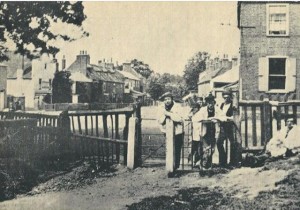 As Walthamstow grew, more land to both sides of the lane was sold for the development, the lane became a road, and St Saviour’s Church was built so the new residents did not have to walk all the way to St Mary’s Church on the far side of Hoe Street.

The Lighthouse Church was built, and quickly became a local landmark, in the 1890s.

By the end of the nineteenth century, Markhouse Road was lined with houses, shops and small factories, and had become a busy through road. It had also become one of the poorest streets in Walthamstow, with all the problems associated with poverty.

It is worth noting that there was never a village here.