The Lea Bridge Road came into being when the first timber bridge across the River Lea was built in 1745.

At first travellers had to pay to cross the bridge, and there was a toll house with a caretaker to collect the money. The wooden bridge was replaced with an iron one in 1820 – by then Lea Bridge Road had become a well-used, if sometimes muddy, route from Hackney to Walthamstow and Leyton.

When Lea Bridge Station was built in 1840, the road become even busier, with some of the first-ever railway commuters arriving from Walthamstow and Leyton each morning, some by stagecoach. At this time train fares were expensive, and only the well-off with good jobs could afford to travel in to London by train each day.

Next to the station, the Greyhound pub did good business serving beer and food to hungry travellers.

Further on, near the turning to Hoe Street, the Bakers’ Company bought a plot of land to build almshouses. These were built in 1857, were homes for retired bakers and their families who had become ill or fallen on hard times. The houses were well designed and built, but in the 1970s the local authority wanted to knock them down in order to widen the road. Luckily they were saved at the last minute and are now homes once more. 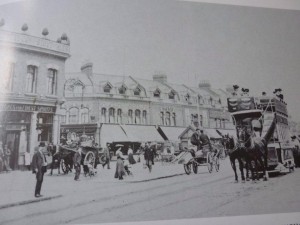 The Bakers’ Arms pub next door opened in 1868 and became famous, giving its name to the local area. It finally closed its doors in 2010, although the building still stands on the corner of Lea Bridge Road and Hoe Street.

By 1900 the area was built up, with a mixture of small shops, houses and Warner flats. It was evidently as busy as the rest of the area, with trams being added to the mix from 1905.

One local lady, now in her 80s, remembers being told about her own grandmother, who was left a young widow with three children. As she had very little money, and was frightened of having to go into the workhouse, she would go out picking wild watercress and then stand by the roadside at the Bakers’ Arms, selling watercress by the bunch to passers-by. She survived.