Two hundred years ago the High Street was known as Marsh Street. Like Hoe Street it was lined with large houses, set back from the street in extensive gardens. There were few shops, and no market.

Many of the houses belonged to people who also had London houses, and came home to Marsh Street at weekends.

In the 1660s the diarist Samuel Pepys visited his Navy colleague Sir William Batten in his house in Marsh Street. Pepys recorded that Batten had a vineyard in his garden, and that the wine he produced was as good as anything imported from France.

By around 1700 the Chequers pub had opened its doors, and was popular for meetings as well as drinking. In later years, the landlords provided dinners of soup and bread for poor children – the first free school meals.

In the later years of the eighteenth century, Francis Wragg of Marsh Street was running a stage coach commuter service to the City, with seven services running to and from Walthamstow each day. When Lea Bridge Station opened in the 1840s, Wragg’s began to offer a coach between Marsh Street and the station, as it was a longish walk. 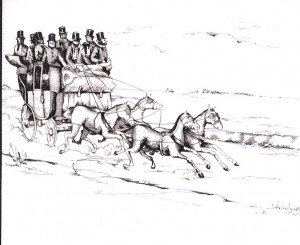 Fanny Keats, younger sister of the poet John Keats, lived in Marsh Street in 1819-20, staying in one house and attending an Academy for Young Ladies in another. When her brother visited, he walked from Hampstead, as he did not have the money to take a coach.

In 1870 the railway got to Walthamstow and a station opened at Hoe Street. That was when serious development started and the gentry started selling up and moving away. Some houses in Marsh Street were sold on for other uses such as schools and factories; one became Walthamstow Truant School; others were pulled down and replaced with small houses and shops.

That was when the market came into being. Up until then, Walthamstow had never had a market; by the 1880s street traders were setting up their stalls and doing good business. At first the local authority tried to get rid of them, but soon they were issuing rules for stall holders – the market was there to stay.

In 1882 Marsh Street officially changed its name to the High Street, recognising that this was now Walthamstow’s main shopping street.

By 1900 the High Street was busy for most of the twenty-four hours in every day. There were shops from fishmongers to a department store to a dolls’ hospital, plus cafes, pubs and a theatre.