Selborne Park belongs to the people of Walthamstow. Originally more than twice the size, it was given in compensation for the common land lost when the railway line to Chingford was built.

The railway was a late arrival in Walthamstow, but when the time finally came in the 1860s to find the most suitable route between the planned Hoe Street Station and Chingford, the choice fell upon part of the common land near St Mary’s Church, the Berry Field. The Vestry – the parish committee that had organised most aspects of local government for many centuries – drove a hard bargain, negotiating not only a good purchase price but an undertaking to build the railway in a cutting which was to be planted with trees, and any excess land to be made available as a recreation area – as it still is. 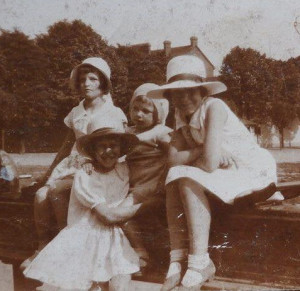 After much consideration, the committee decided to buy the land that is now Selborne Park, carefully minuting that it was to belong to the people of Walthamstow to provide recreational space for all. Once the new Council came into being in the early 1870s, the Vestry agreed that a Council Officer should “interest himself” in the management of the park. As time went on the Council seem to have assumed that the land was theirs.

All through the nineteenth and twentieth centuries, the park was the venue for many concerts, meetings and performances. There were roundabouts, a slide, a giant chess board, boules, a café and carefully tended planting. 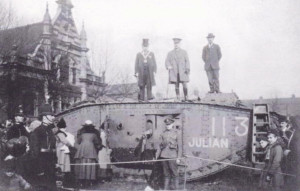 During the First World War one of the newly invented tanks came to visit as part of a fundraiser to persuade local people to contribute to the price of more tanks and guns. Bands played, minor scuffles were quelled and endless impromptu football games played. In later years there was a public art project.

It was not until the late 1970s, after the Victoria Line came to town, that the local authority took a chunk of the park space for a new bus garage. Then another chunk vanished to provide a shopping mall – the land was sold to the developers on a long lease. Only around a third of the original park remains, and it is a precious, and all-too-small green lung in a crowded area. Recently an attempt to cut down up to half the mature lime trees and sacrifice all but a handkerchief of green space to provide yet more shops met with fierce resistance from residents. For the moment, the trees, game playing children and summer sun bathers can remain.