Once the Chestnuts was just one of many grand houses that lined Hoe Street. Now it is a rare survivor, shorn of its gardens and with a new school building only a few feet from its south wall.

There has been a house on this site since at least 1600. The present one was built for Thomas and Catherine Allen between 1745 and 1747 – the dates are on the original rainwater butts that are still in place.

The beautiful original staircase and plasterwork are also still in place, as are some of the fireplaces and other features of the 1740s, having survived more than 250 years of changes of owner and of use.

Like many other Walthamstow mansions, this one started out as a family home but changed hands quite frequently as its owners made and lost City fortunes. 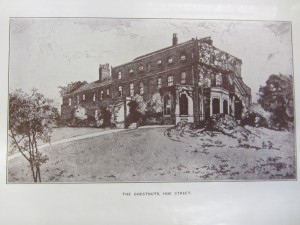 One of the last families to live here were the Reads. John Francis Holcombe Read was a City entrepreneur by trade, but his real love was music. Read, who played the viola himself, devoted much of his money to bringing music to Walthamstow – he built the Victoria Hall, where many of his own compositions were performed. As Read devoted more time and money to music, his fortune was largely spent and he had to move to a smaller house.

The Chestnuts and its garden and grounds were sold to the Tottenham and Forest Gate Railway Company – the house narrowly escaped demolition as the final route for the railway line runs a few hundred yards to the west.

The Railway company did not need the house, and looked to sell it, but by the 1890s it was too big for any of the people who were coming to live in Walthamstow to buy as a home. So it was bought by the local authority, and became a mental hospital for women – it was known as the Chestnuts Branch of the Brentwood Lunatic Asylum.

In the 1930s, the Chestnuts became a commercial school for girls, where shorthand, typing and book keeping were taught. And later again, it became an evening school.

Now the house is temporary housing for students and others while the local authority decides how best to restore and use it on behalf of the local community to whom it belongs.