When our houses were new, most food was home-cooked. As there were no fridges or freezers, shopping was done day by day from local shops . It was easy to do your shopping, as there was a wide variety of food available in and around Queen’s Road – most of them stayed open late, and many opened on Sundays.

Arthur Spencer was often sent shopping, and eighty years later could remember exact details of the kinds of vegetables he bought and how much they cost. He remembered lots of people were paid by the day, and so would only have enough money to buy one day’s food at a time.

Money was counted in pounds (£) shillings (s) and pence (d). There were twelve pennies in a shilling and twenty shillings in a pound
In 1910, an average daily wage might be four shillings, paid cash in hand at the end of the day..
Some food prices:
Bread 1 3/4d for a two-pound loaf
Mutton sausages 4d per pound
A large smoked haddock 2d
Potatoes best: 1d for 4lbs; ordinary: 1d for 5lb
Tomatoes 1 ½ d per pound
Apples 1 ½ d per pound

Fresh vegetables and fruit were only available in season: so you could get apples in the autumn and winter, but they were mostly gone by March; tomatoes were available through the summer and autumn; fresh peas in the summer. All these items were grown within the UK, and many were raised locally in the many market gardens along the Lea Valley.

There were greenhouses that extended the season for some items, but no one expected to be able, for example, to eat strawberries or mange tout peas in February. Dried fruit such as dates was available all year round, and local people ate a lot of this. 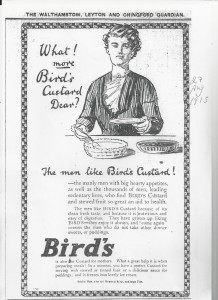 Most people who could afford it ate a lot of meat and fish. At this time it was usual to cook food very simply – a joint of meat would be roast or boiled, and served with boiled vegetables. Fish was steamed between two plates over a pan of water, or fried. Many people would make solid dishes such as pies and rice pudding for dessert.
Tinned food was available, and labour-saving items such as Bird’s Custard were becoming popular.

Almost everyone drank tea, and cocoa was extremely popular. In this shop window in Somerset Road, no fewer than five kinds of cocoa are promoted. Coffee was available, but as expensive coffee beans only – instant coffee was not yet available. 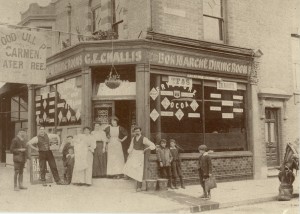 There were places to eat out, but much less choice. Tea rooms were very popular – the Ancient House was used as one. And on Queen’s Road there was at least one café, and the fish shop served take away fish and chips. There were many pubs, but few of them served food. And the first curry and pizza houses would not open for another half century.