Few of the people who lived in the area when the houses were new were very well off. The developers and builders had a specific kind of tenant in mind – the new poorer kind of commuter and their families.

As many as nine tenths of the houses were let out on weekly tenancies – the cheapest and least desirable kind.

But this was a “respectable” area. A few residents had the living-in, usually very young, maidservant that showed they counted as middle class, and many of the people who were in work were either skilled tradesmen, clerks or shopkeepers. Even the weekly rents were too high for unskilled workers such as labourers.

But there was a lot of unemployment in the 1890s and 1900s, and when the First World War came, many jobs vanished. By the end of the nineteenth century there were some local schemes to help the jobless, but people who fell on hard times still often had to go into the workhouse. And for many others, the idea of going “on the parish” was deeply shameful.

There were some local charities that existed to help the poor. And there are records of soup kitchens run by kind individuals, often shop keepers, and by churches. 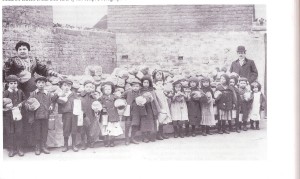 But ideas about where poverty began, were very different. In the early 1900s, Arthur Spencer’s family, where the father had a skilled trade, no one went hungry, but the family could only afford to put condensed milk in their home-made toffee on a good week. And all the children had to leave school at the earliest opportunity so they could get jobs and start to bring home a wage.

Henry Allingham, who was to be one of the earliest members of the Royal Air Force in the First World War, and lived on to be 113, spent some of his childhood in Verulam Avenue, just off Markhouse Road. Harry went to Gamuel Road School in 1901, and remembered: “of the 40 or more children in my class the majority were poorly dressed, had no shoes and quickly resorted to fights…any books we had were shared and dog-eared” 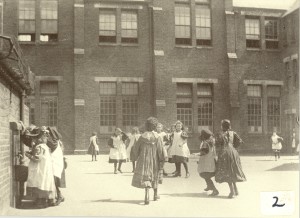 Richard Barltrop  attended Gamuel Road School in the early 1930s, and some of his memories were very much the same: “Some of the children were pitiful. Shortly after I went to Gamuel Road there was some trouble when a boy ran off with my shoes, and my parents came to the school. When they saw the boy, he was such a wretched, ragged, skin-and-bone creature that they told (the head teacher) to forget it. Children with their legs in irons through rickets were an unremarkable sight”.