By Victorian times, there were dozens of specialist charities in existence, providing everything from medicine to food parcels to smart clothes for job interviews. Increasingly charities made money by holding events – including flag days, outings and garden parties. Often they involved music and performance.

By late Victorian times, the workhouse system was more humane than in previous decades, but still only for the desperate. For the elderly and orphans it was less punitive, but was still far from kind to the merely unfortunate. There was still no unemployment pay, and going into the workhouse meant humiliation and, quite possibly, losing whatever home you had. So countless people endured poverty to the point of starvation without asking for official help. 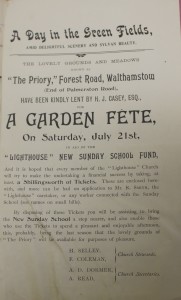 In Walthamstow as in other places, there was some other assistance on offer, both from formal charities and in the community. It was common that rich individuals would leave money in their wills to help the poor. In the sixteenth century, George Monoux had not only had the church rebuilt and founded a school, but set up almshouses to house and feed some of his poor neighbours. A hundred years later, Thomas Gamuel left a bequest of land to provide food and fuel. 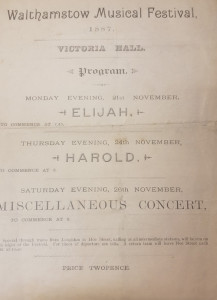 By Victorian times, there were dozens of specialist charities in existence, providing everything from medicine to food parcels to smart clothes for job interviews. Better-off people made regular donations, and in some cases donors bought books of tickets enabling them to sponsor individuals to obtain, for example, a layette for a new baby.

Increasingly, though, charities made money by holding events – these could include flag days, outings and garden parties. Often they involved music and performance. At one end of the scale this could be a “smoking concert” – the Victorian equivalent of an open mic night, when participants were invited to perform to sing, play or recite – and at the other, a large scale concert with a full orchestra and professional soloists. 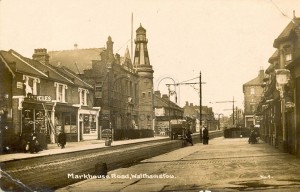 There were some grand events, especially those at the Victoria Hall (now the Granada), but even at these there were tickets at a wide range of prices, partly so as to fill the large space and partly so as to enable as many people as possible to hear the music. At the Lighthouse Methodist Church in Markhouse Road, the concerts and illustrated lectures funded a breakfast club for some of the many local children who arrived at school too hungry to think.

Many local schools raised money by their own efforts. As the ones who arrived at school hungry, many did not arrive at all because they had no shoes – in some families, children took turns to attend school in the only available pair of boots. Teachers were fully aware of this, and boot clubs were set up. Those parents who could, subscribed a set amount per week, and events were held to secure the money for households with no money at all to spare. 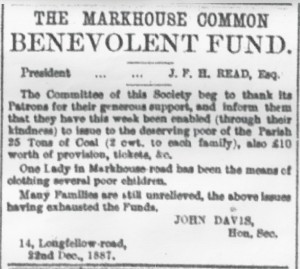 Hospitals, too, depended on charity to keep the doors open and beds available. It was not until the National Health Service came into being that most local hospitals could operate without subscriptions, flag days and concerts being held each year to ensure they could cover basic operating costs.