The trains were steam trains – they worked by burning coal to heat water. The water turned into steam, which was directed into pipes that turned the wheels of the train. The trains had to carry coal with them, and all along the route, there had to be places where they could fill up with water.

When the Lea Bridge Road Station opened in 1840, Walthamstow was not a part of London, but a well off village, still technically in Essex. The local directory called it

‘one of the largest and handsomest suburban villages near the metropolis… and contains many large …villas…. mostly occupied by the wealthy merchants and others who have their places of business in London’

The station was opened in September 1840, and was an elegant building, complete with a bell tower. The bell was rung whenever a train was due 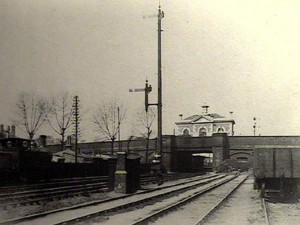 It was a long way from most of the Walthamstow of the time, and the local horse drawn coach firm, Wragges, ran a successful ‘shuttle’ service from Wood Street and Walthamstow Village to Lea Bridge Road Station. The Houghton children remembered their father, in 1850, standing outside their house on the southern end of Hoe Street, with his travelling blanket over his arm, waiting to flag down the coach to take him to the train station every morning.

Train lines running into Central London almost always went through very poor areas to get to the big stations, destroying the houses of people who lived there, so Parliament insisted each line must run a number of ‘Workmens trains’, with much cheaper tickets for poorer travellers.

The idea was that the poor people, forced to move out of the centre of London because of the railways, would still be able to travel to work the in centre cheaply.

The Railway Companies wanted to offer as few workmens tickets as possible, because it cut down on how much money they could make.

In the 1860s a line was proposed that was to become the Chingford Line.

It was supported by local landowners hoping to profit from selling their land for building – and many did. A school recreation ground in Walthamstow village was cut in half by the train line, and land to the north of Hoe Street Station was bought as public space instead. 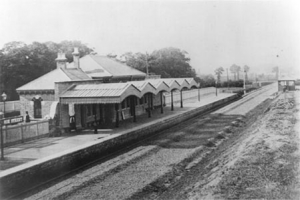 In 1872 the train line was fully opened between Chingford and Liverpool Street. The main Walthamstow Station was called Hoe Street (now Walthamstow Central)

The original station building is still there, on the south side of the Station. 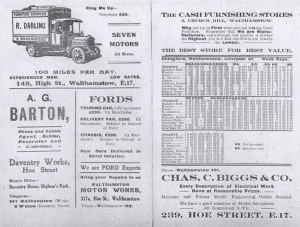 It was popular partly due to workmens fares – which were available on trains getting into Liverpool Street before 7.30am and cost twopence return per day. The next cheapest ticket cost fourpence, one way, four times as much,. It was common for poorly paid City clerks to take the workmens trains early in the morning, and then to wait around the Liverpool Street Station area until 8am when their offices opened. They became known as ‘The Liveerpool Street Breakfast Club’

There were regular reports of overcrowding: in 1894 a Mr Wilcash, a local councillor noted ‘it was painful to see the discomforts that young and respectable women were subjected to in their daily journey’ And it was not unusual to find young boys sitting in the overhead luggage racks.

There were huge housing developments from the 1870s onwards New houses were built for lower middle class and working class families.

In 1891, the local vicar, Rev. H.Maitland of St Saviour’s said of the area

‘ there was a continued going away of wealthier and a continual coming in of poorer residents…those who get their living by handicrafts of all descriptions, and in most cases hardly’

The Tottenham and Forest Gate Railway

They were absolutely right, but what they got instead in 1894 was a line which was originally planned be a passenger line to Kings Cross. Because of pressure from the Railway Company it became a main freight line from the docks at Tilbury, going through Queens Road on the way to St Pancras. Local people agitated for a passenger connection to Victoria, but were ignored.

Trains ran out of London as well as into it! When the first Bank holiday was created, for Whitsun, 1874, the train Companies were quick to put on special ‘excursion’ trains. The first ones went to Chingford, for Epping Forest 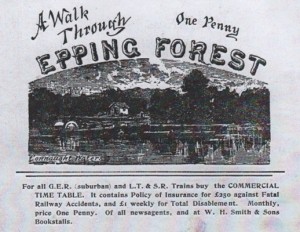 “They came decked out in paper hats, face masks, noise makers and such like impedimenta with the Retreat as their refreshment venue. Schools, workhouses, infirmaries … departed again at nightfall leaving unspeakable deposits of filth and litter”   (Sydney Riggs, who ran one of the ‘Riggs Retreat’ tea houses in Epping, who obviously didn’t like his customers much)

Very soon the railways were offering day trips to further away places such as Southend, Frinton and Clacton, allowing many people their first ever sight of the seaside, and starting the Great British Seaside Holiday